© Chu Chi Thành. March 9, 1973. After the Paris Peace Accords signed on January 27, 1973, the greatest exchange of prisoners in the Vietnam War took place in the Spring of 1973, near Thach Han River (Quang Tri province). Here the North Vietnamese prisoners released by the South Vietnamese are running towards their comrades in arms. South Vietnamese flags can be seen flying in the background 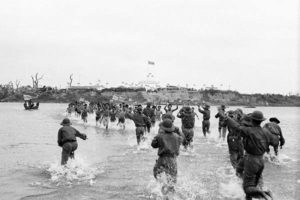